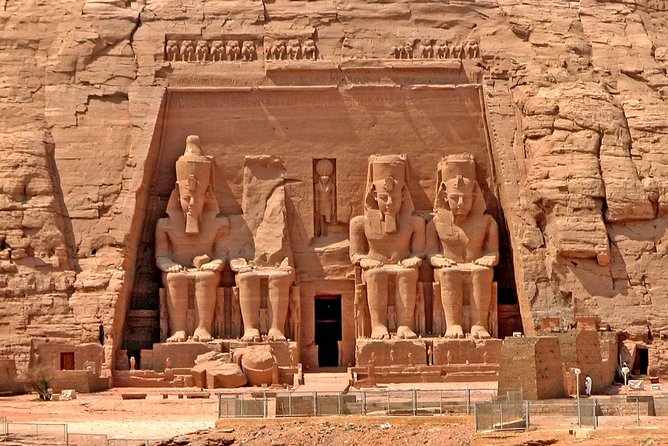 The twin temples at Abu Simbel are 2 of the best-preserved and most awe-inspiring of ancient Egypt. Discover them with a quick and convenient plane ride from Aswan. See the towering statues of Ramesses II and his queen as you learn about their intriguing repositioning in the last century. Enjoy a swift takeoff via plane from Aswan, then arrive close to the shores of Lake Nasser. Arriving at the temple site, marvel at the colossal statues guarding the entrances. Walk through the impressive façade into the Great Temple’s interior—images and carvings depicting ancient deities adorn the walls. Observe too the Small Temple, also hewn into the mountain-face that stands in honor to Queen Nefertari—Ramesses II’s chief consort. Learn about the temples’ dramatic relocation: With the construction of the High Aswan Dam, these and others like them would have been lost under the Nile’s flood waters when Lake Nasser was created. Costing over 9 million US dollars, this substantial challenge was expertly executed, so you may still enjoy the temples’ majesty in all their preserved glory. Even in a country festooned with temples, Abu Simbel is something special. This is Ramses II’s great temple, adorned with colossal statuary standing guard outside, and with an interior sumptuously decorated with wall paintings. Justly famous for its megalithic proportions, Abu Simbel is also known for the incredible feat, which saw the entire temple moved from its original setting — set to disappear under the water because of the Aswan dam — during the 1960s in a massive UNESCO operation that took four years.